Not every computer, browser or printer is set up with every font; it is important to verify that the selected font displays properly.

Below are examples of an incorrect font display: 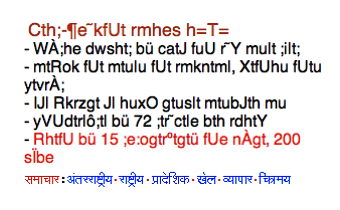 PC and Macintosh computers come equipped with many different fonts that can easily be manipulated on your screen. For some fonts to display properly, the original software CD may need to be re-installed and “Language Packages” activated. Even after the language packages are installed, some language character sets will still require that additional fonts be installed.

For scalable screen text, EPS, PSD or Illustrator files are recommended. Additionally, font samples can be sent to you for selection, giving you options on artistic style.

Do not attempt to split foreign text! Languages have strict rules where a carriage return can go. Without knowing the language, you will not be able to separate languages like Thai, Japanese etc.

Some examples of accents or other letters not used in the English language of random words:

Most computers are equipped with CE or Central European fonts. Should the font not display properly, check your font folder for CE fonts, Times CE, Helvetica CE, and so on.

There are several official languages in India and surrounding countries; each language uses a different font. It is highly recommended that you not manipulate any of these languages unless your computer contains the font and you are familiar with these languages:

Right-to-left (RTL) languages like Hebrew, Urdu, Arabic and Farsi often look perfect on your screen, but do not display properly. It is highly recommended that you not manipulate any of these languages.